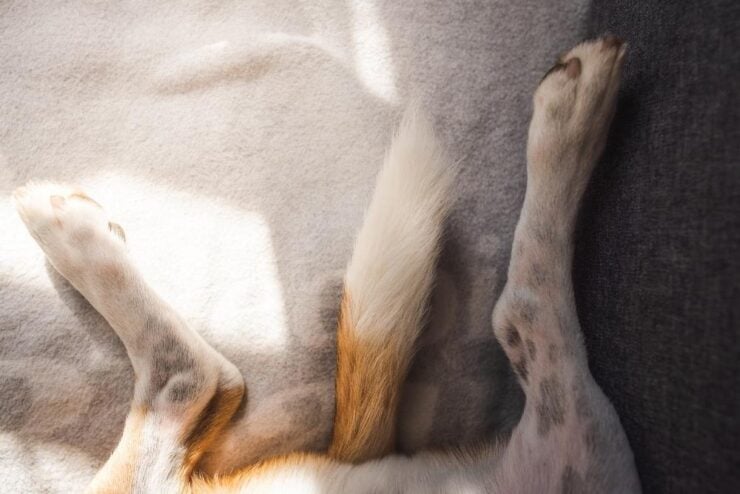 Why Do Dogs Kick Their Back Legs? Is It Instinctual, a Habit, a Sign of Discomfort?

There are many reasons why a dog kicks its back legs. We go through all of them.

If you have noticed your dog kicking their back legs, you may be concerned that they are unwell or in pain. There are a number of explanations for why a dog might be kicking their hind legs, and some are more serious than others.

Most of the time, there’s no need to worry about your dog kicking its back legs. This may just be the result of an itch, muscle fatigue, habit, or an instinctual behavior. However, it can also be an indication that your dog is in pain or is suffering from a medical condition.

In this article we will cover the main causes for this physical behavior and the action you can take to prevent it from happening.

Key Reasons Why Dogs Kick Their Back Legs:

The Difference Between Medical and Behavioral Leg Kicking?

In order to tell if your dog’s leg kicking is harmless or more serious, you should look for any other symptoms of illness that your dog may be displaying aside from the leg kicking. These might include:

You should also consider how suddenly their leg kicking began and how regularly it occurs.

One of the most common reasons why a dog may kick its back legs is in order to mark its territory. Many dogs will kick their legs to make their paw scrape across the ground after pooping. It is a misconception that they are attempting to cover their poop, as cats are well known to do.

Dogs have scent glands on their paws and are actually attempting to spread their scent rather than tidy up after themselves. They will do this in order to mark their territory and warn other dogs off.

This behavior is perfectly acceptable in the canine kingdom and is therefore no cause for concern whatsoever. If you see your dog kicking its back legs in the dirt the only thing you need to worry about is cleaning their paws before they jump up onto the couch later!

In the same way that many dogs wag their tails or bounce around to communicate excitement, so some dogs will kick and jut their back legs. This is often more common among small dogs with stumpy tails who are not able to wag them easily. It is also more common in hyperactive dogs who have a build up of excitable energy.

As this is a sign that your dog is feeling happy and excited, there is no cause for concern. You can train this behavior out of your dog most effectively if you start when they are a puppy and proceed in the same way that you would teach a dog not to jump up when they get excited.

Like us humans, dogs sometimes get an annoying itch that they just have to scratch. This can be due to a small cut healing, something caught in their fur, or fleas. If the itch is in a difficult spot, they may kick their back legs in a weird way because they are trying to reach it.

The first thing you should do is give your pooch a big rub in order to try to relieve their itch. Then it is advisable to inspect your dog for fleas or other sources of irritation. But sometimes and itch is just an itch.

Another very common occurrence is for dogs to kick their back legs during sleep. Dogs are known to enter a very deep state of R.E.M. as they sleep, and the kicking that occurs while they are in this state is perfectly natural.

You might hear people describing how their dog was ‘dreaming last night’, and it can often seem like they are chasing a ball in the land of no. However, it is more likely a muscle jerking and spasming as it relaxes into deep sleep.

Occasionally, a dog who is kicking their legs during sleep may be having a seizure. The easiest way to tell is to try to rouse your dog. If it awakens then it probably wasn’t having a seizure.

If, however, you are unable to awaken your dog then you should call a veterinarian as it could be more serious. Dogs will usually wake feeling rather disoriented and confused after a seizure and a vet will be able to administer the right meds to put them straight.

If your dog’s back legs are shaking when it is awake then it is possible that it is experiencing muscle spasms. If you have ever over exercised at the gym or pushed yourself too hard on a run, then you will no doubt have experienced similar spasms yourself.

Dogs, like humans, can get overworked and overtired and their muscles will spasm as a result. Working dogs who are involved in high levels of physical activity are more likely to suffer from these spasms than lap dogs, and they will present as erratic twitches and jitters through the hind legs.

To avoid this happening, you should always make sure that your dog is getting plenty of water and fluids as these keep the muscles hydrated and healthy. If a dog becomes dehydrated, the muscle contractions can become disrupted and painful.

Also, be sure to give your dog rest periods throughout the day, just as you would allow yourself to rest. This will prevent it from becoming overexerted and fatigued to the point of pain.

Of course, spasms can be a sign of something more serious. If they happen more than once, or begin happening regularly, then your dog could have an underlying health condition.

Petit mal is a type of small seizure that some dogs suffer from. These manifest as rhythmic seizures in one area of the dog’s body, be that the hind legs, hips or elsewhere. These tend to pass quite quickly, leaving the dog unaffected.

Grand mal seizures are more serious. These grip the animal and cause it to lose consciousness and fall to the floor. The whole body, including hind legs, will contort and spasm and your dog could even lose continents of their stool and urine functions.

These seizures tend to be caused by extreme overexertion, physical ailment and injury, or neurological damage. Inflammation or damage to nerves can also be a cause, as can arthritis, infections and disruptions to your dog’s electrolytes and minerals.

The terrible things about grand mal seizures is that they can cause the body temperature to rise dramatically and this can result in the dog suffering brain damage if untreated.

What Should You Do If Your Dog Suffers a Seizure?

Call the veterinarian immediately. If you notice that your dog is also shaking their back legs often, then it is wise to be on the lookout for other symptoms such as lameness, wincing, whining, and depression, as these could all be indicators of a more serious illness or injury.

If your dog appears to be in pain when they are kicking their back legs then they may be suffering from DJD, otherwise known as degenerative joint disease.

This is when the smooth cartilage between moving joints wears away. The cartilage does not contain any nerves, meaning the animal feels no pain when the joints move.

However, when the cartilage thins, nerve endings are exposed and the animals will experience terrible pains as the head of two bones rub against each other. This disease is degenerative, meaning it gets worse gradually over time, and it can be the result of arthritis, aging, or over exertion.

What Should You Do If Your Dog Suffers From DJD?

To help your dog avoid this disease you can make sure that it doesn’t overwork its joints by jumping from heights onto hard surfaces. You should also massage your dog’s joints and muscles after exercise just as you would warm down yourself after a workout.

Another possible cause for a dog kicking its back legs could be a disease called Medial Patellar Luxation, which is essentially when the knee cap moves in and out of position.

Sadly, this is a common orthopedic condition amongst dogs, and although it can affect any breed, it tends to be particularly prevalent in small dogs like pomeranians and chihuahuas, Yorkshire terriers and miniature poodles.

It can be the result of an injury to the knee caps, or as a result of a malformation of the hip joints. Sometimes it only affects one of the back legs, other times it can affect both.

How Can You Spot Medial Patellar Luxation in Dogs?

You can spy the disease in puppies because it often presents as bowlegs before becoming more pronounced as the dog matures.

In older dogs you can see the symptoms of Medial Patellar Luxation if you catch your dog regularly hopping or limping and lifting its back legs off the ground to shake and kick them.

What To Do If Your Dog is Kicking Their Back Legs?

As aforementioned, if your dog is kicking its hind legs it could be attempting to mark out its territory and not be suffering any pain whatsoever.

However, if you see that your dog is doing it regularly, and you detect other symptoms alongside the leg kicking, then there could be something more serious at play.

You should contact your local vet and let them conduct a thorough medical examination to determine the cause of your dog’s leg kicking.

What Can a Vet Do About a Dog Kicking Their Back Legs?

There are medicines and injections which can help with arthritis, joint pain and even seizures. Surgery might be necessary if your dog’s hips or knee caps need replacing.

Whatever the case is, a veterinarian will be the best person to advise you and care for your pooch.

How To Prevent These Diseases

Of course, a prevention is always better than a cure, and to give your dog the best chance of staying healthy you should make sure it has a balanced diet with the right vitamins and minerals. You should refrain from overworking your dog, and always massage and rest your dog after exercise.

And finally, you should stay vigilant and keep your eye out for other symptoms, because the earlier you notice the problem, the sooner you can relieve your dog of pain. 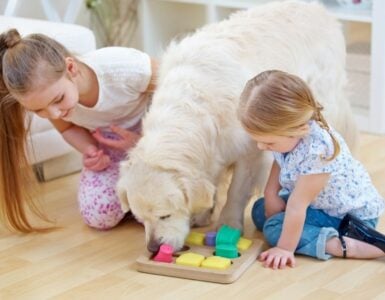 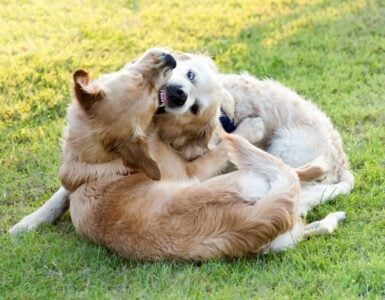 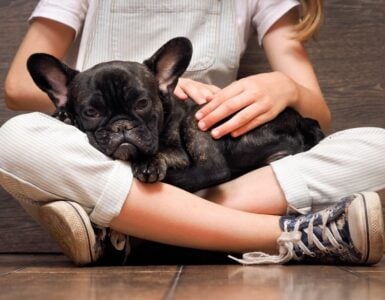