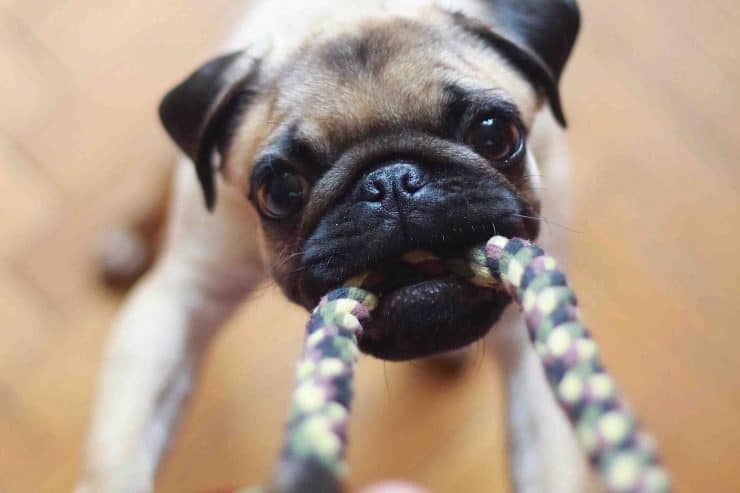 Many fear that tug of war will make a dog aggressive, but if taught properly, it can increase confidence and strengthen the bond between owner and dog.

There exists a longstanding myth that playing tug of war is bad for dogs and can cause them to become aggressive.  This likely started because many dogs will start growling during an intense tug of war session.  These are usually not warning growls, but rather growls of excitement that are very common in this type of play, just as when pups growl when playfully wrestling with each other.

Not only is tug of war safe for most dogs to play, the game has many positive benefits and should be encouraged if played properly.  Many dogs love it, and it provides exercise, mental stimulation, as well as bonding and training opportunities.

Contents show
1 Why Should I Play Tug of War with My Dog?
2 When not to play tug of war
3 How to play tug of war properly
3.1 Initiating the game
3.2 Teach the dog the “drop it” or “let go” command
3.3 Always let the dog win?
3.4 Tug of War Technique
4 Is it okay if my dog growls while playing tug of war?
5 What should I do if my dog’s teeth touch my hand?
6 Best Dog Toys for Tug of War
6.1 West Paw Zogoflex Bumi Dog Toy
6.2 Goughnuts TuG Interactive Large Dog Toy – MaXX Black
6.3 Pacific Pups Products — 11 Nearly Indestructible Dog Toys
7 Conclusion

Why Should I Play Tug of War with My Dog?

A spirited game of tug of war can provide considerable exercise for your dog.  It is both physically and mentally tiring for the pup, which is a good thing.

Because tug of war is extremely interactive, it helps forge a bond between human and dog.  There are few activities where the physical connection is so close, so strong, and so sustained (moreso than even, say, a game of fetch).  Dogs increase their trust in their handlers, and learn to work comfortably with them.

Play has been shown to improve the general behavior of dogs, and tug of war is an intense form of play.  Successful, enjoyable play with a handler also gives the dog increased confidence.

Tug of War can be a great obedience training asset.  Not only does the dog repeatedly practice responding to the “Drop It” command to release an object from its mouth (an invaluable tool in everyday life), but there are also countless opportunities to train other commands.  The game can be interrupted with “sit,” “stay,” and “down” commands, for example, which reinforce these behaviors.

A tug toy can also be used as a reward in regular dog training.  Because it is so desirable, it can replace a food reward.  Many agility, protection, and other dog sport handlers use a a quick tug game to reward success, both in training and at the conclusion of events in competition.

With the right toy, a game of tug can help with a dog’s dental hygiene, providing stimulation to the gums and cleaning loose debris.  If only flossing was as much fun for humans!

When not to play tug of war

Don’t play tug if your dog has not learned a release command such as “drop” or “give.”  See our article How to Teach a Dog to Drop It on how to train this behavior.

Don’t play tug with a puppy.  It can cause damage to a young dog’s developing jaw and baby teeth.  However, puppyhood is a good time to teach the release command.

Don’t play tug with a senior dog who has not played the game for a while.  Older dogs who have not consistently worked their jaws and clenched hard with purpose are more prone to lose teeth in a game of tug.  Like human teeth, tooth roots become weaker in old age, and an overzealous dog might dislodge his own teeth.

Don’t play tug if your dog is overly possessive of the toy or has related resource guarding issues.  If, say, your dog growls when you reach for his tug toy on the floor, you must address that issue well before engaging in tug play, which may exacerbate the problem.

Don’t let children play tug with your dog.  The risk is simply too high.  You make many judgments when playing tug that children are not capable of making, and a wrong judgment can lead to a dangerous bite.  Also, tug is a form of training, and children should not be given the responsibilities that go with training a dog.  It’s better that your child play tug of war with each other or you!

How to play tug of war properly

A lot has been said about always initiating the game of tug yourself, and not letting your dog do so.  There is some truth in this, but not only for the reasons often given.

In general, it’s best not to let a dog initiate any game or behavioral routine, but only because it establishes a poor precedent.  If every time your dog drops a slobbery ball in your lap, you reward it by tossing the ball for it to fetch, guess what the dog will keep doing in the future?  Just as if every time a dog nudges you to go on a walk, you take him on one, the dog is dictating the terms of your relationship.  It’s not about being “alpha,” but rather setting the ground rules, much like a parent does with a child.

Clearly, if you are holding a toy and your dog approaches and tries to grab it out of your hand, this is not a behavior you want to reinforce by engaging in tug play.  On the other hand, if you are playing with your dog and she brings a toy over and presents it for a game of tug, there’s nothing wrong with engaging.  Make her release it to remind her of the rules, and then begin the game.

Teach the dog the “drop it” or “let go” command

It’s imperative that your dog learn to release the toy immediately on command. It’s not hard to teach, and we provide comprehensive instructions here, which also include how to teach a dog to “take it.” Learn both and you’ll be tug of war pros in no time.

Another commonly expressed “rule” of tug of war with dogs is to “always let the dog win.”  There’s no reason to do this, and plenty of reasons not to do this.  You always want to be in control of the game, and frequent commands for release are important to this end.

Of course, letting your dog win sometimes helps build confidence and keeps the game interesting.  Nobody losing every game will continue to enjoy that game.  But the enjoyment for the dog should be in the sustained back and forth tug, not “winning” by pulling the toy free or leaving with it.  A 50-50 “win” ratio is just fine, and ending the game with a release and praise for it is a good way to remind your dog that you set the rules.

Only pull the tug toy from side to side, not up and down.  Dogs can damage their neck when it is forced backwards.

Try to avoid quickly jerking the toy — let the dog do the pulling while you just resist, changing direction side to side as well as the intensity of pulling.  Suddenly yanking a toy can cause a dog to pull muscles or harm teeth.

Is it okay if my dog growls while playing tug of war?

By nature, many dogs growl while tugging or playing with other dogs.  It’s a much different growl than a warning growl or fear growl, and you should learn to discern the difference.  A trainer once likened growling during play to people “talking trash” while playing sports — sort of a measure of intensity of play.

If you ever feel your dog is growling excessively or suggesting aggression in any way (such as its tail stops wagging or its ears start to pin back), give a release command and then a down stay for a 30 seconds or so to deescalate the situation.  Just like kids, dogs can get overly worked up during play and need a time out.  However, if you resume the game and the dog returns to an aggressive or threatening manner, end the game immediately.

While tug games can often be used to teach a dog to calm down and relax on command (by periodically pausing the game), there are some high arousal dogs that simply should not play tug of war at all.  You likely know if you have one.  In these cases, the dog never calms down and the game is not any fun at all for you.  So best not to play it at all.

What should I do if my dog’s teeth touch my hand?

Don’t let your hands near a dog’s mouth while playing tug.  Hands are off limits for a dog’s mouth, and putting them close during a game can make it confusing for the dog.  The toy is the object of the tug.  If the dog’s teeth ever do touch your hand, let out an “owww” or an “oops” so the dog knows what behavior violated the rules, and immediately pause the game for 30 seconds.  The dog must learn that teeth on hands and fingers is unacceptable.

There are no shortage of tug toys available, many with bells and whistles.  But the best ones are simple, soft and pliant as to not hurt the dog’s mouth.  Rope and rubber based tug toys are favorites.

This incredibly beefy tug toy is a beast and should stand up to the strongest tug warriors.  (They also have a model available for medium to large dogs which is slightly less beefy.)

This set of rope toys has something for every size pup.  The largest rope tug is 22” long and 1.5” in diameter, and there are tugs for the daintiest of dogs.  With all the shape and size variations in this pack, you are likely to find an ideal tug for your dog.

Tug of War is a fantastic game for many dogs, and can provide a variety of benefits. But it is important that you train your dog to play the game properly so that nobody (human or dog) gets injured or develops bad behavioral habits. Played correctly, it can be a strong bonding experience for you and your pup. 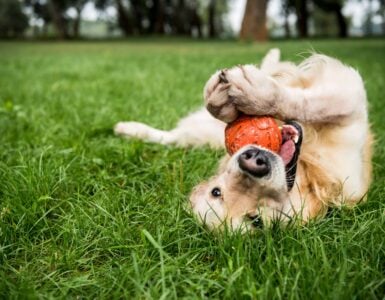 Puppies love to play, but how much is too much? We explore guidelines for healthy puppy play and exercise. 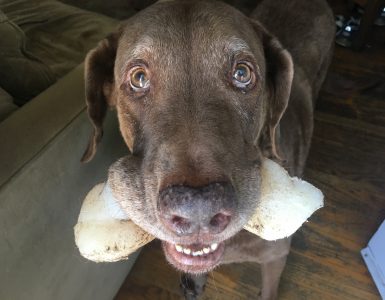 Nylabones remain one of the most popular synthetic chew toys for dogs. But are they safe? 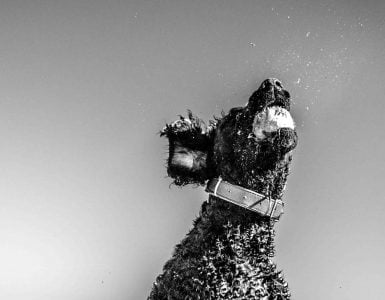 Once just a pooch's pipe dream, automatic ball launchers for dogs are now reliable and affordable.