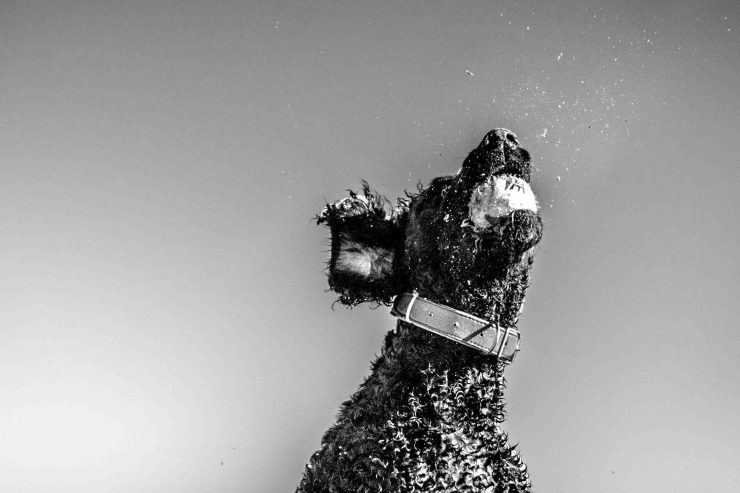 Once just a pooch’s pipe dream, automatic ball launchers for dogs are now reliable and affordable.

Years ago when I was young and broke, a wealthy boss of mine offered me a holiday housesitting gig.  But instead of offering it as a paid job, she tried to sell it as an “opportunity,” telling me that it would be just like going on a vacation.  She raved about all the amenities — swimming pool, tennis court, home theater, etc.  “A date would be very impressed if you brought her there,” she told me.

After getting over the initial insult of being offered a week of work with the only compensation being a chance to experience her lifestyle, I agreed to do it.  Why?  Because I decided my date would, indeed, be impressed.  My “date” just so happened to be my water fanatic retriever who would go nuts at the chance to swim all day, every day, in my boss’ big pool.

And enjoy it she did, endlessly retrieving balls and bumpers as I sat poolside, enjoying the premium beers I found in the bar fridge.  On the second day, while exploring the property, we walked across the tennis court.  It was then that I discovered it was equipped with an automatic ball launcher.  I had always imagined that if my dog could have a single fantasy, it would be a tennis ball launcher that fired endless retrieves.

After fiddling with it a bit, I got it to fire a ball.  My pup bolted after it and brought it to me.  After turning a dial, it started firing them fairly quickly in succession.  My dog chased each, overwhelmed by the dozens of balls that now covered the court.  She would pick up one and immediately drop it to pick up another, and then another…and another — complete bliss.  Finally she just froze for a moment, wide eyed and panting.  It was as if her synapses were overwhelmed and she couldn’t process this unbelievable abundance of good fortune.  Be careful what you wish for!

She recovered quickly (and helped me clean up all the balls from the court), but it made me realize how great it would be if she could have an automatic ball launcher of her own.  She never did (I stopped being broke but never achieved tennis court property status), but now, years later, the automatic dog ball launcher is not only a reality, but also widely available to dog owners.

Working much like the tennis ball machines but on a smaller scale, automatic dog ball throwers are devices that launch a ball up to 30 feet for your dog to fetch.  Most ball launchers can be adjusted in distance so they’ll work in any space (for instance, balls won’t fly over the fence in a smaller yard).

Some models run on regular batteries or include a rechargeable battery, which saves money on replacement batteries.  Others include the option of AC power, which is helpful inside or in an outdoor area near a power source.

Although there are several automatic ball launchers on the market, and we tested several, there is one that we strongly recommend, the iFetch Too.  It is well made, reliable, and our dogs became quick fans of it.  It is ideal for medium to larger dogs.  See it here.

The iFetch Too is an upgrade to the original iFetch, and now uses regular size tennis balls — a huge improvement in our eyes (the smaller balls could possibly be swallowed or choked on by larger dogs).  The launch distance is adjustable, ranging from 10 feet to 40 feet.  There is also a random selection, which keeps you dog on his toes.

The unit is considerably larger than its predecessor, weighing in at a whopping 12 lbs.  It comes with 3 balls, an AC charging cable, and instruction manual.

The iFetch Too also has a built-in rechargeable battery, so it can be used anywhere in your yard or a park, and you’ll save the cost and hassle of buying replacement batteries.  A full charge takes about 3 hours and provides about 250 ball launches.  With the AC adapter, of course, there is no limit of launches.

The controls on the device are very simple.  A power button turns the unit on and also displays the status of the battery’s charge.  The button is also used to set the distance, which includes three separate distances — 10 feet, 25 feet, 40 feet, as well as the random setting.

Other Ball Launchers We Recommend

With smaller 1.5” balls, the iFetch is ideal for small and medium sized dogs.  Just like it’s big brother, the iFetch launches balls at adjustable distances of 10, 25, and 40 feet.  Set at 10 feet, it works well inside, especially since it can run off AC power.  Unlike the iFetch Too, it does not have a rechargeable battery but rather uses 6 C batteries.

Like the iFetch, iDogmate is available in two sizes, one with regular tennis balls and one with the mini 1.5” balls.  The large one launches at distances of 10, 20, 40 and 50 feet. while the small unit throws them 10, 20 and 30 feet.  Both feature a remote control so you can operate the device without having to be right next to it.

The IDogmate has a nice, wide loading area, which is very helpful if you plan to train your dog to use the machine without your assistance (more on how to do this below).

Both sized units feature rechargeable lithium ion batteries that can power up to 1700 ball launches (and you just know somewhere there is some crazy fetch-aholic dog that has actually gone through an entire charge in one session!).

Finally, we are including an old school favorite of ours — the Chuck-It Tennis Ball Launcher.  With no power source other than your arm, the Chuck-It allows you to launch a ball further than you can throw it.  If your dog needs some serious distance fetching and you’re able to sling it, this might be a good solution (and much cheaper!)

If you own a fetch-happy dog, the benefits of ball launchers are readily apparent.  Many dogs love to fetch more than just about anything, and fetching provides terrific exercise.

While it would be great if we could devote as much time to playing fetch with our dogs as they desire, that’s usually simply not an option.  That’s one area where ball launchers can help out.

Teach your dog how to “Drop it.”  See our detailed instructions on How to Teach a Dog to “Drop It”.

Once your dog knows the “drop it” on command, have your dog hold a ball and then place your hand over the ball launcher reservoir and have your dog “drop it” into your hand.  Reward with a treat to reinforce (optional).

Now do the same step, but let the ball drop into the reservoir.  Reward with treat (optional).

When the dog is reliably dropping the ball into the reservoir, you can turn the machine on and the dog will automatically be rewarded with a fetch.

Soon, the dog will learn that dropping the ball into the machine’s reservoir results in a fetch opportunity.

For most dogs, learning this process doesn’t take long as the training repetitions are fun and rewarding.

For many dogs, an automatic ball launcher is a no-brainer.  Whether used inside or out in the yard, they can satisfy your dog’s fetch instinct and provide plenty of exercise and mental stimulation. 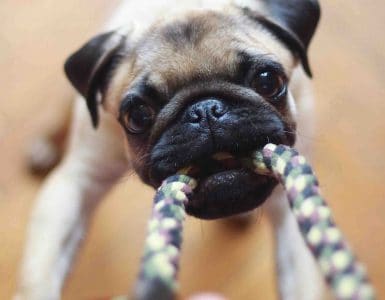 Many fear that tug of war will make a dog aggressive, but if taught properly, it can increase confidence and strengthen the bond between owner and dog. 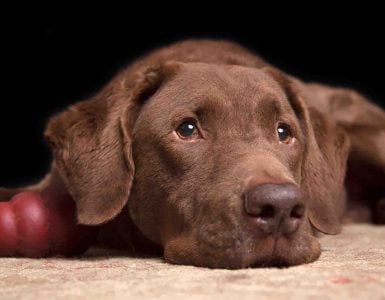 From its unlikely beginnings over 40 years ago, the Kong has outlasted the competition and remains a fixture in dog homes around the world.

Milk Thistle For Dogs — Can It Help A Dog’s Liver?

My Dog Growls At Nothing! Why?

Do Dogs Get Tired Of Barking? How Can I Stop It?

Why Does My Dog Lay On Me? Is Something Wrong?

Grass Allergies In Dogs and How To Treat Them

Stay up to date on our new content and offers