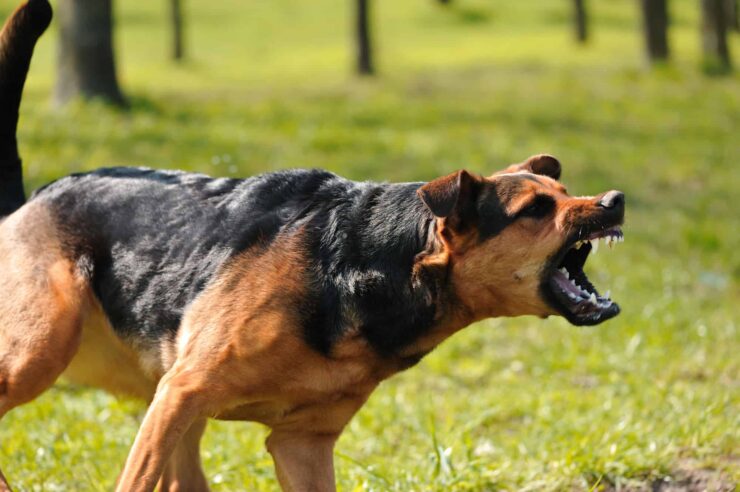 Most dogs don’t bite people, but when they do, the consequences can be serious. We look at the reasons dogs bite people.

Humans have long-considered dogs to be man’s best friend. They’re loyal companions perfect for taking on a hike or snuggling on the couch.

However, dogs also have their limits, which is what often causes them to bite or snap.  Dog bites are common, though most go unreported, especially if they do not cause serious injury.

Let’s look at the reasons why dogs bite, and some steps you can take to prevent dog-biting accidents.

Why Do Dogs Bite?

Dogs can bite for any number of reasons. However, there are a few that are more common. In many cases, the causes are easily avoidable. Specifically, you want to look out for signs of:

Not all dogs will bite when confronted with these emotions or situations. However, instinct often causes dogs to act out in surprising or aggressive ways. So, the best way to prevent dog bites is to understand why they bite in the first place. Then, you can learn what you can do to avoid it.

Many dogs have a naturally protective nature. In addition, some dog owners purchase dogs trained strictly for personal protection. In either case, it should be no surprise if your dog bites someone they perceive as a threat, even if that person is you.

In addition to protecting their owners, dogs will often resource guard. Resource guarding is when a dog guards its food, toys, or other objects. In some cases, they might resource guard their owners or family members. If a person or other animal gets too close, the dog will snap at that person, delivering a nasty bite.

Fear is one of the most common reasons a dog will bite. Fear can stem from past experiences and will often lead to a dog becoming so overwhelmed they lash out to create distance between itself and the thing scaring them. It’s an innate response that can be difficult to overcome.

Sadly, aggression due to fear is common with animals who’ve suffered abuse or neglect. Fear of isolation, pain, or a person can cause a dog to become so fearful it bites anyone who comes near. Unfortunately, the threat doesn’t have to be real for the dog to show signs of fear, making this trigger tough to avoid.

There’s little more dangerous than an injured animal. As with resource guarding and fear, a dog in pain will do anything to prevent further injury. An injury or illness can cause your dog stress or anxiety, leading to a similar reaction to fear.

Pain is usually a temporary trigger. It could be something as simple as a splinter in the paw or as complex as kidney disease. Your dog’s reaction will depend largely on its pain tolerance. However, in any case, you should always seek treatment if you think your dog is hurt.

Just as humans tend to get a bit grumpy when they’re hungry, so do dogs. The main difference is that when a dog is starving, it can and will become violent. To a dog, starvation or severe hunger is similar to an injury. That being the case, they’ll lash out at anyone near them in an attempt to protect themselves from further harm.

Starvation will often cause dogs to resource guard, adding another layer to your dog’s bite risk. In addition, severe cases of starvation can lead to illnesses or diseases that cause further pain for a dog. This combination of sickness and hunger can lead to a highly volatile and aggressive dog.

Dogs with a genetic predisposition for aggressive behavior are highly prone to biting. However, aggressive dogs aren’t necessarily poorly behaved. Many are doing what their DNA tells them to or, in the cases of poor training, appeasing their owners. Many believe that certain certain breeds have a more aggressive nature, thought that is a controversial issue and there is much literature to dispute that claim.

While many dogs of breeds commonly (and often unfairly) considered “aggressive” are well behaved and don’t pose a bite risk, it is more likely that a larger breed with greater bite force will cause worse injury if they do in fact bite someone.

Dogs who bite out of aggression might bark or growl often, lunge toward fences, or hyperfocus on people or animals nearby. You should consider rigorous training with a professional if your dog displays any of this behavior. Engaging with a dog that is behaviorally volatile will often lead to injury, so you should nip it in the bud if you can.

Another reason a dog might bite is if it gets startled. A loud noise, unexpected touch, or rowdy children can cause a dog to react aggressively to its instincts. However, in most cases, a dog biting in response to being startled is not a genuinely aggressive action. Instead, it tends to be out of shock, similar to when a human might accidentally hit someone who scared them.

However, when a dog feels startled, they might mistake the feeling for fear. Since fear is such a massive trigger for dogs, it shouldn’t be surprising to see a similar response when they’re startled. It’s essential to watch out for this type of reaction if your dog has a high prey drive. When a dog is focused on prey, the sound of footsteps might be all it takes to trigger a bite.

It’s important to remember that not all dog bites are due to aggressive, defensive, or inappropriate behavior. Dogs will often nip, nibble, or mouth at their owners or whoever they’re playing with. Whether they’re playing with another pet or a human being, a common response could include small or gentle bites.

For example, a dog who is overly excited or affectionate with their owner might start nibbling at their skin in a way that mimics grooming. These small nips aren’t aggressive behavior, but they can still be painful. Also, for the first several months of a dog’s life, they use their mouths to communicate with its siblings. Puppy bites are common, but they don’t indicate bad behavior or poor training.

All dogs are capable of delivering a severe bite. There are no exceptions to this rule. However, that doesn’t mean you can’t take steps to prevent your dog from biting someone or getting bit yourself. Proper training, socialization, and knowing what to look for are all critical factors in preventing dog bites.

Dog ownership brings a long list of responsibilities, many of which involve keeping your dog and others around it safe. Therefore, proper training is one of the most crucial steps dog owners must take when they get a dog. Not only does it help reinforce positive behaviors, but it will ultimately lead to your dog living a happier life.

Some dog owners opt to hire professional dog trainers to help prevent dog bites or aggression. A professional might be the best choice for you and your dog if you’re a new owner or have a breed known for its aggression. However, if your dog is typically more docile and doesn’t have biting issues, you can try training techniques on your own to establish a foundation of good behavior.

Properly socializing your dog is another way you can help desensitize them to triggers. Dogs are pack animals, so providing yours with a few dog friends or encouraging them to play with others will work wonders for your dog’s confidence and happiness. A happy, confident dog won’t feel compelled to bite in response to stressors.

However, you should always heavily supervise your dog’s socialization. If you’re socializing your dog to decrease aggression, a best practice would be to keep them on a leash. If necessary, use a muzzle. As your dog becomes more comfortable around other dogs, then you can consider removing the muzzle. Be sure to consider your dog’s demeanor carefully before eliminating the lead.

Unless there’s an underlying medical condition, dog bites don’t happen for no reason. Your dog will almost always show signs before they bite, whether the trigger is pain, surprise, hunger, or a need to protect. As their owner, it’s your duty to learn those signs so you can warn those around you or remove your dog from a dangerous situation.

For example, a common sign of fear in dogs is the tail tucked between its legs. In addition, certain tail wags, ears pinned back, and a stiffened body posture often indicate potential aggressive behavior.

Dogs will usually give a warning growl before biting. It is rare for them to bite without growling first, but it does happen. If a dog is growling at you, they are trying to communicate that they are uncomfortable in the situation, and it’s best that you understand this warning.

Finally, common injury symptoms include favoring or guarding the injured body part or constantly licking. Be wary of a dog in discomfort or pain.

These are just a few examples of behaviors to look for. Each dog is different, so get to know yours well.

The most important thing you can do for your dog is act as its advocate. Your dog can’t speak for itself, so it’s up to you to ensure they’re safe and not put in positions where they might feel compelled to bite. This goes hand-in-hand with proper training and socialization. If you can anticipate how your dog will behave, you can plan accordingly.

For example, if your dog is food aggressive, don’t allow guests or children to get too close at feeding time. If you suspect your dog’s biting is due to pain, schedule an appointment with your vet. Similarly, if your dog resource guards, take precautions when guests come over to ensure no one gets hurt. These measures are for the safety of you, your dog, and those around you.

Dogs don’t randomly bite people. There is always a reason or motivation for them to do so, and it’s important that owners recognize the propensity for the behavior, find the cause, and treat or manage the condition accordingly.

Unlike many other dog behaviors that go unchecked, dog bites can have serious and even fatal consequences, so it’s imperative that dog owners address the situation before something regretful happens. 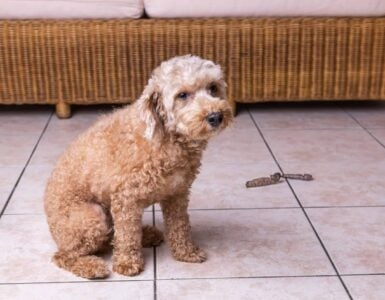 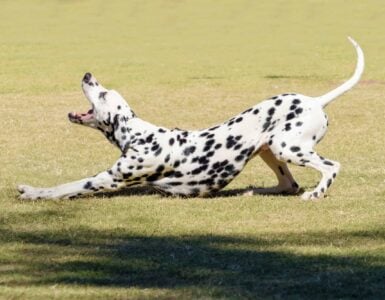 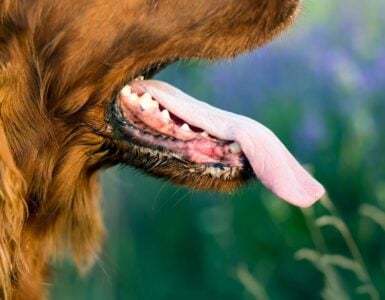 Why Do Dogs Stick Their Tongue Out? (When Awake)

People don't generally let their tongue hang out of their mouth, but many dogs do. Why?