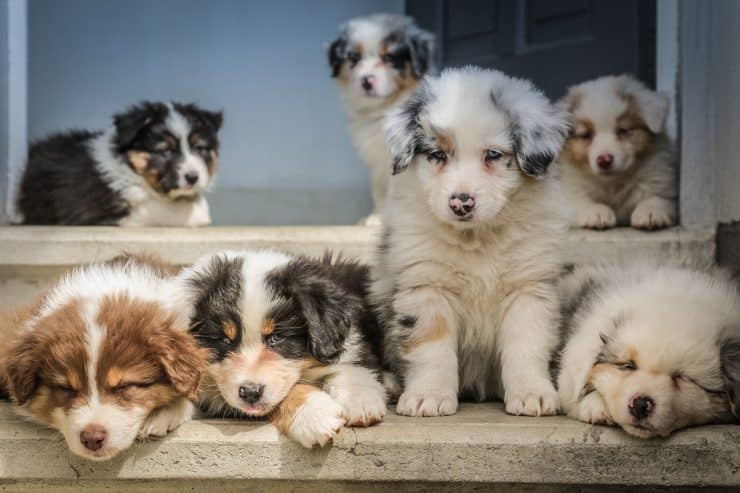 There is no shortage of homeless dogs in the world, so it is best to avoid unnecessarily creating more. Here are the primary methods of canine birth control available.

Although letting your dog have puppies may sound like a fun idea, it is generally a better idea to leave breeding to breeders. There are lots of dogs in shelters who need homes, and lots of puppies who need homes, too.

The most effective and humane way to avoid pregnancy in dogs is have them spayed or neutered. If you choose not to do that, keeping them away from other unaltered dogs is the next best option. That being said, many pet owners may not be aware that there are alternative birth control options that veterinarians may prescribe depending on your wishes and your dog’s age and health.

A caveat: Most of these methods are only available through vets (if you live in the United States); even if you can purchase some of the medications or methods, you should consult your vet before trying them out.

This article intends to expand your knowledge but not direct you to make medical decisions for your dog, at least not without first consulting your vet.

When Can Dogs Breed?

Female puppies usually go into heat – with symptoms similar to a human menstrual cycle period, although this is also the only time when they can become pregnant – for the first time between 6 to 15 months of age. It is important to note that they are not immune from pregnancy during this first heat cycle.

In comparison, male dogs are not limited to short cycles of fertility. At as young as 5 months of age, they may be able to sire puppies, but they become more fertile after they are about a year old because they are more physically mature.

Puppies can be spayed or neutered at 6 months of age, although if your dog is this young, it would be best to coordinate with your veterinarian to make sure it is healthy for your dog at this point (some dogs may need to wait a little longer). Whether male or female, if your dog is younger than 6 months old, you will want to be careful about its exposure to other dogs who are not fixed in order to avoid accidental breeding.

The most common form of canine birth control is sterilization, known as spaying and neutering for female and male dogs, respectively. Spaying and neutering can not only help prevent unexpected pregnancies but also reduce the likelihood of certain health problems and modify certain unwanted behaviors.

Neutering, the sterilization option for male dogs, involves the removal of the testes and is a simpler procedure than a spay. Neutering may reduce behaviors sexually mature male dogs exhibit, such as roaming and aggression, although this may depend on the dog’s age. Younger dogs are generally less likely to exhibit those behaviors after neutering, while older dogs who have already been exhibiting those behaviors are not as likely to stop.

Although some health risks may be mitigated by sterilization (especially when done at a younger age), a study published in July of 2020 found that some breeds may become somewhat more susceptible to certain health problems after sterilization. Thus, it is important to consult with your vet when considering sterilization so that you are informed about health risks your dog’s breed might be associated with.

While birth control pills are available both for humans and for dogs, the pills used for dogs are not the same as those used for humans. A synthetic progestin pill, megestrol acetate (brand names: Megace and Ovaban), postpones heat in female dogs and is prescribed by vets.

Although it cannot be used during a dog’s first heat cycle, it can be used to postpone any subsequent cycle.

As with human birth control, canine birth control pills may cause side effects including weight gain, nausea, mammary gland enlargement, coat color changes, and lethargy. Also, because extended use may increase the risk of uterine infections in the future, this contraceptive method may not be the best long-term solution.

A prescription liquid steroid called mibolerone (brand name: Cheque Drops) can also delay the heat cycle in female dogs. This contraceptive needs to be administered daily for a month before the dog’s heat cycle, and should not be used before or during the dog’s first cycle.

Mibolerone has a number of potential side effects, including infertility, body odor, behavior changes, skin problems, and liver damage. It also cannot be used for certain breeds (including Bedlington terriers) or for dogs with certain health problems, including liver and kidney disease.

Another canine contraceptive option is the intramuscular injection of medroxyprogesterone acetate (brand names: Depo-Provera, Provera). As a synthetic form of progesterone, this contraceptive suppresses the heat cycle in female dogs.

Medroxyprogesterone acetate can also be used in smaller doses to combat behavior problems such as marking, spraying, and aggression.

This injection is prescribed by veterinarians, is effective immediately, and lasts for three to four months.

This particular option is generally less favored because it has a number of potential side effects, including weight gain, lethargy, personality changes, diabetes, hypothyroid, and uterine infection. It also may interact with a number of other medications, and is not FDA-approved, though it may be prescribed by vets “off label.”

Although it is not currently approved for canine use in the United States, Suprelorin is an implant that works as a non-permanent contraceptive for male dogs. Its contraceptive effect will not take place immediately, but after about six weeks, the implant should be sufficiently suppressing the dog’s testosterone so that he will not try to mate. Even if he does mate, the implant will cause low sperm production that will be unlikely to lead to pregnancy.

The amount of time the implant will work depends on dosage, either 6 or 12 months.

It should be noted that the change in hormone levels may bring about changes in your dog’s behavior, although this may also be a side effect of neutering that is typically more obvious in dogs who are older when they are neutered.

While there are some physical barrier canine contraceptives, these are not as effective as the chemical, surgical, and implant options. These barrier methods primarily include diapers, belly bands, and similar devices that attempt to physically prevent dogs from being able to mate. Some of these alternatives may also make your dog’s bathroom functions more difficult and are not ideal for long-term use.

Keeping Unaltered Dogs Away from Each Other

If other contraceptive options are not immediately available or possible, It may be best to just isolate your dog from other intact dogs. Just as with humans, the only 100% effective form of dog birth control is not to have sex.

Although the most common method of preventing unwanted canine breeding is surgical sterilization, there are other birth control options available for dogs, too. If you think one of these options might be a good fit for your dog, consult with your vet first – they may even be aware of new alternatives that could better fit your dog’s needs.

When should dogs be spayed or neutered?

Some health and behavioral benefits connected with sterilization may be more connected to sterilization at a young age. Unless your dog has a health issue that would be exacerbated by sterilization, though, it is generally not a bad idea to get the dog sterilized even if they are older.

Can my dog take the same birth control as humans do?

That being said, if your dog accidentally ate one non-canine birth control pill, they should still be safe; problems are more likely to arise from the consumption of much larger quantities than one pill. However, if you are concerned, you should contact your vet.

What natural birth control options can I give my dog?

Currently, there are no reliable natural birth control options you could give your dog to prevent pregnancy. If you have questions about a particular substance, though, you could address it with your vet.

Can a dog’s pregnancy be terminated?

Yes, there are a few ways for a dog’s pregnancy to be terminated, although they should all be handled by veterinarians for the sake of the dog’s health. A spay will terminate pregnancy, as well as sterilize the dog; additionally, there are certain drugs that may terminate a pregnancy, although those are associated with side effects and complications.

In any instance, if your dog is pregnant and you are concerned, your first step should be to consult your vet.

What is a false pregnancy?

Generally, the symptoms develop four to nine weeks after the cycle ends and usually last two to three weeks. However, some dogs may experience more severe side effects or behavioral changes, which may require medical intervention.

Spaying will prevent future false pregnancies, although it is best done after the symptoms have subsided. If your dog is experience false pregnancy symptoms – especially those that are more severe – consult with your vet about next steps. 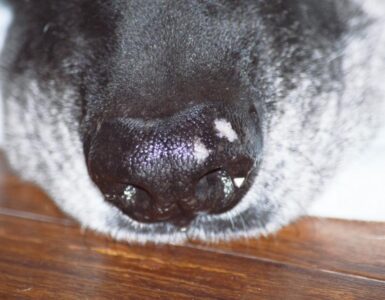 White spots on a dog's nose have various causes, some benign and some serious. We explore them and any potential treatment. 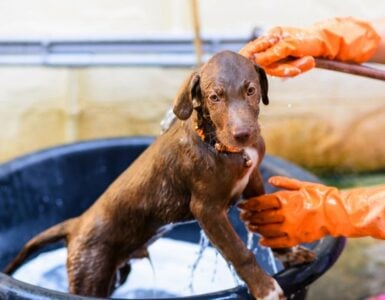